Last night I dreamt that I tried to summit Mt. Whitney several times, only to be mysteriously transported to the bottom of the mountain before I reached the top. One minute I was climbing the mountain and the next I was at the bottom, wondering how I got there. Apparently my anxiety about summiting the highest peak in the contiguous United States is expressing itself through my dreams. 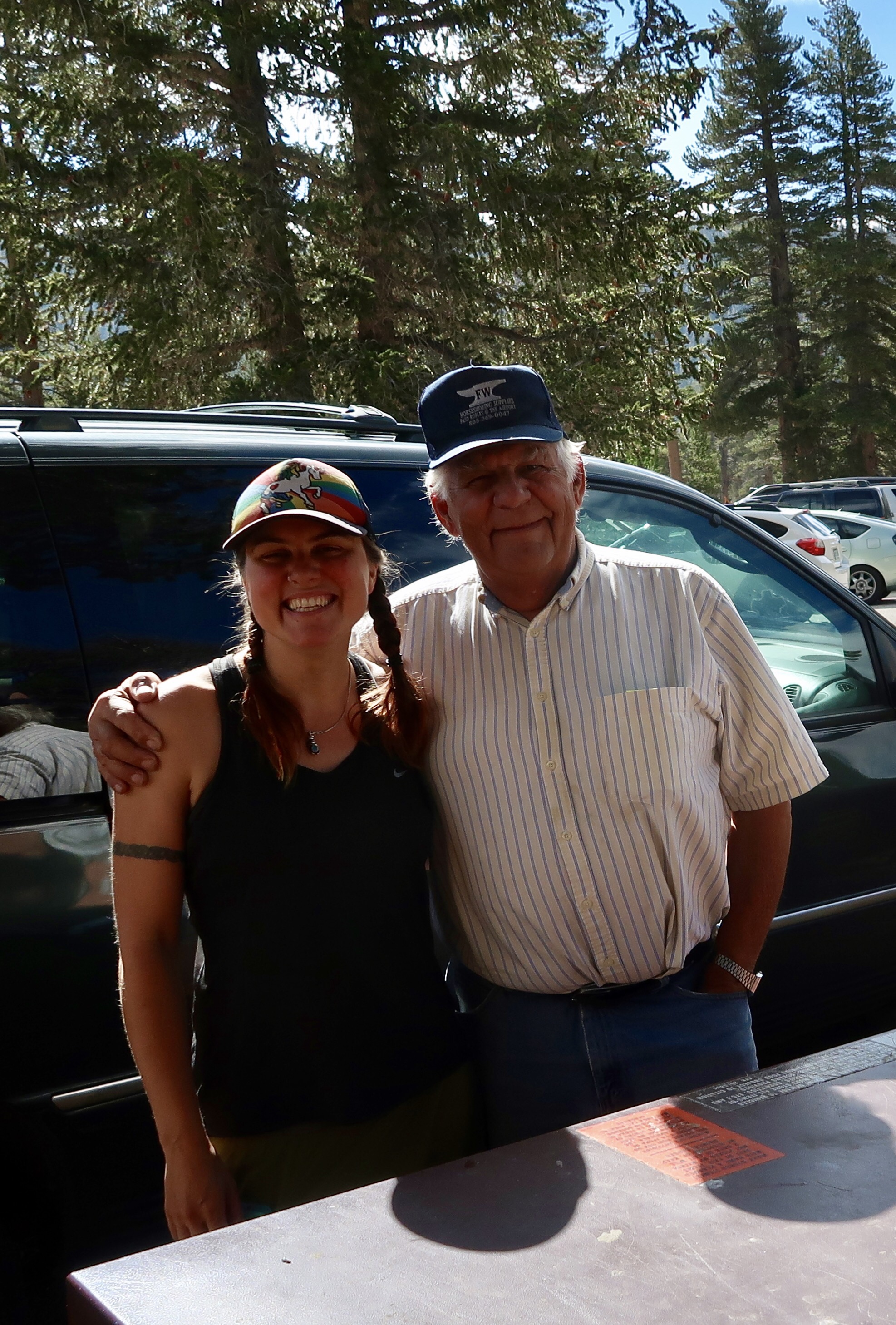 Lone Pine Kurt and Me

I awoke at 6:45 am and prepared for the day. I chatted amiably with the one other hiker in the girls dorm room who had just completed the John Muir Trail (JMT). She summited Mt. Whitney the previous day and provided some insights into what I could expect, which was reassuring. I bought a tasty cinnamon roll from the Alabama Hills Cafe and waited at the picnic table in front of the Whitney Portal Hostel for my ride to arrive. The Sierras dominated the landscape to the west, framed by deep blue skies dotted with fluffy white clouds. Back at the Trailhead for Trail Pass

My ride showed up shortly after 9:00 am in a red minivan. Kurt is an elderly gentleman wearing a baseball cap and a button-up shirt tucked into his jeans. He was carrying two other passengers from Texas who were planning to start hiking the JMT from Cottonwood Pass as well. Kurt pointed out various landmarks as we travelled, including Mt. Whitney and Lone Pine Peak. We chatted amiably as he navigated the windy hairpin turns to the Horseshoe Meadow Campground. As we drove, I recalled the last time I was here and the difficultly I had in getting a ride from the trailhead. I was thankful that it was so much easier coordinating transportation this time around.

“Have you seem any bears yet?” Kurt asked.

“No, not yet,” I said, “although I hope to see one before I’m finished with my hike.”

“Well I see a bear pretty much every time I come up here,” he said.

Before I had time to express surprise at this statement, we rounded a corner and passed a sign with a picture of a bear on it. The Texas guys and I groaned good naturedly at his joke. I’m pretty sure he makes the same joke every time he drives to the trailhead.

Horseshoe Meadow! As Beautiful as Ever. This time the mountains have no snow.

When we reached the parking lot, we jumped out and began preparing our gear to hit the trail. Kurt sidled over to me and whispered conspiratorially in my ear, “I don’t think they’re going to make it” referring to the other 2 passengers. I have no idea if he’s correct or not as I find that it’s kinda hard to predict who will or won’t finish a given trail. Heck, even I’m not going to finish the PCT this year. It was pretty funny though and I had to stop myself from laughing out loud. Kurt is a hoot. 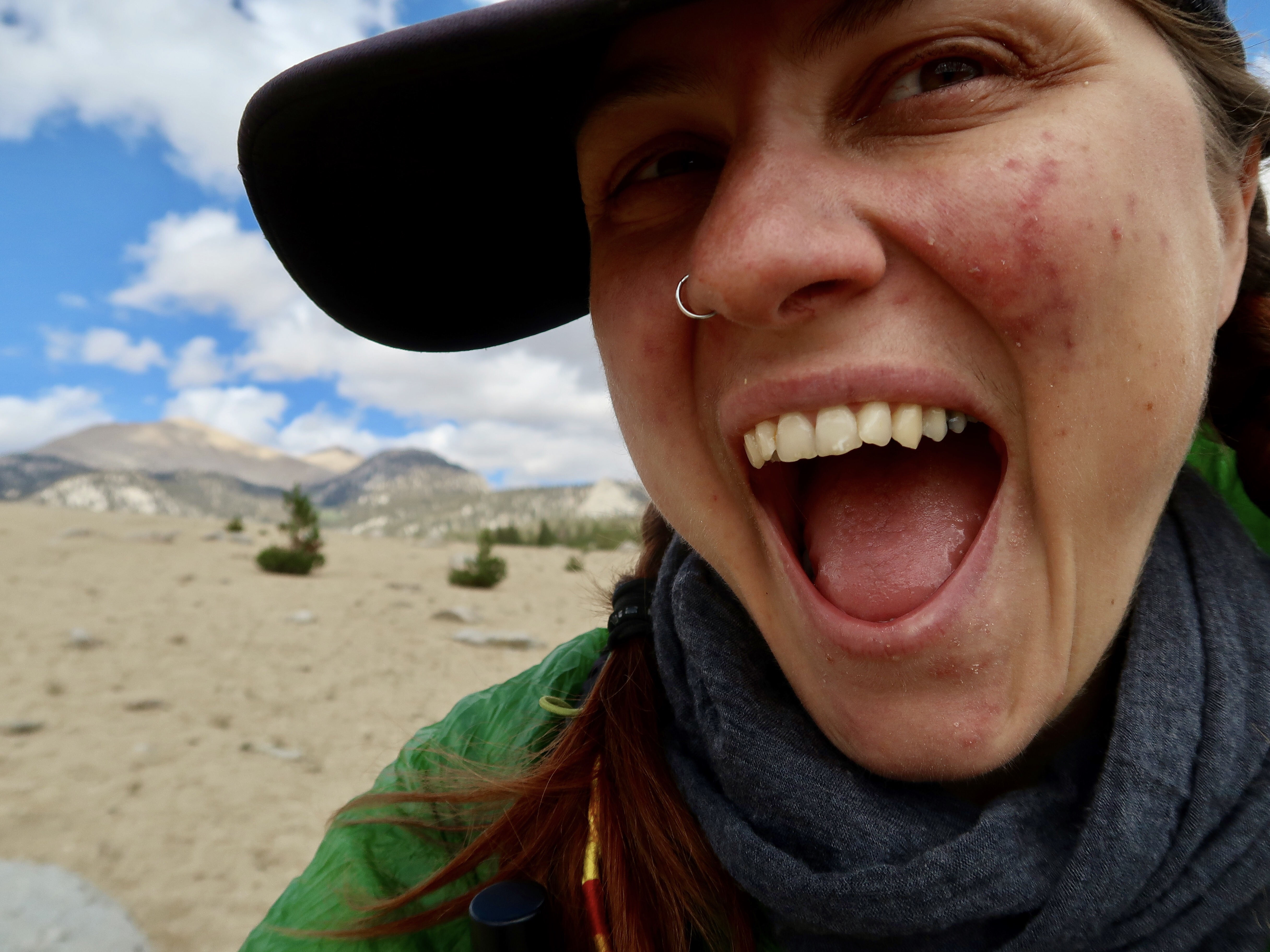 After bidding goodbye to Kurt and the Texas boys, I casually walked the .3 miles to Horseshoe Meadow. I fondly remembered Horseshoe Meadow from my last visit – at that time it was the most beautiful place I’d seen on the PCT so far. This time cows grazed a short ways away. I sat down to enjoy the scenery and was chilled within a few minutes. Wow. It is colder up here than I anticipated. I hope I have enough layers. I decided to take it nice and slow to give myself time to acclimate to the elevation. Horseshoe Meadow sits at 10,000 feet and I would only be going higher from there. I began hiking the 2.3 miles up to the PCT on Trail Pass trail. Before long I noticed that I was feeling a bit nauseous and I was having a hard time breathing. These are both classic symptoms of altitude sickness. So I hiked slower and took breaks until I felt better before continuing. Back on the PCT!

When I reached Trail Pass, I headed north. It was good to be back on the PCT! The path continued to head gradually uphill and I continued to take frequent breaks. I passed the junction for Cottonwood Pass in late afternoon and reached Chicken Spring Lake around 5:30 pm. Horseshoe Meadow as Viewed from the PCT Chicken Spring Lake is the location where I was originally supposed to meet up with my Advanced Snow Skills class before it was cancelled, so I’d been curious to check it out. I had initially considered camping here, but I thought I had a few more miles in me. I was feeling a little lousy from the altitude but it wasn’t too bad. Hiking further today would mean a shorter today tomorrow in anticipation of summiting Mt. Whitney *hopefully* on Monday. I filtered some water and continued north. At this point I was at an elevation of 11220 feet and climbing. It didn’t take long for me to go from feeling a little lousy to downright awful. I had a terrible headache, my stomach was churning and my pulse was racing. And the temperature was dropping fast. I figured hiking uphill would warm me up so I didn’t pull out extra layers, which was a mistake.

I decided I’d better stop for the night and found a flat-ish spot under a tree. I put on my warmer layers and set up my tent while I shivered. I crawled into my sleeping quilt, not caring that my spot was actually fairly slanted, and felt miserable as I tried to warm up. The thought of eating dinner was out of the question. I was pretty sure that I couldn’t keep any food down. So I read the chapter on altitude sickness in my Wilderness Medicine book that I downloaded to my phone. Yep. I definitely have it. And how. 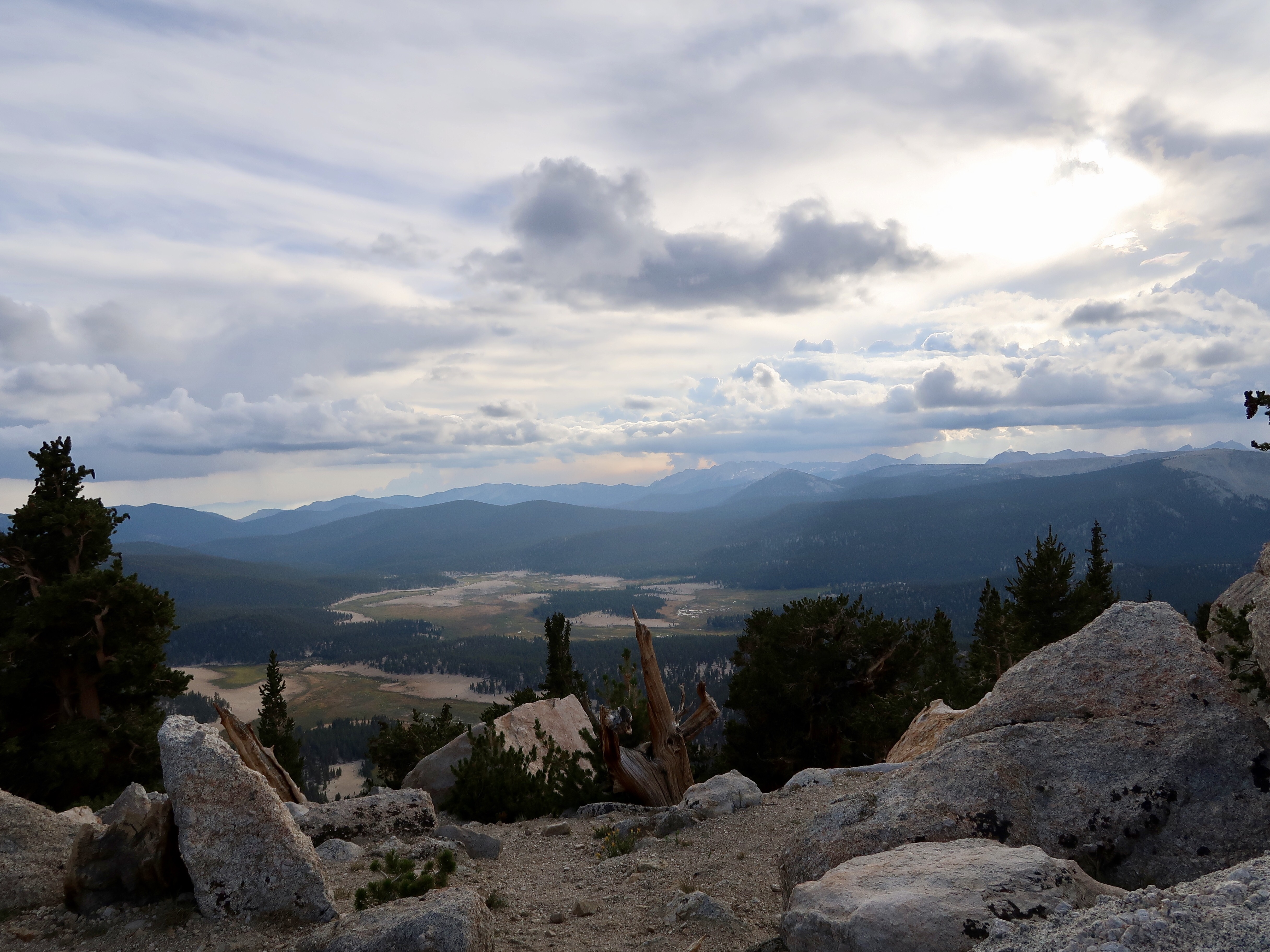 Eventually the pounding in my head lessened a bit and I heated up some water. I drank the water, plain, and felt a little better afterwards. My shivering finally stopped and I even ventured outside to position my bearcan filled with all of my food away from my tent. I placed my shoes under the right edge of my sleeping mat in an attempt to level it out and curled in a ball under my quilt.

I am an avid hiker, traveler, and adventurer who is on the mission to explore hiking trails around the world.  I’m also obsessed with National Parks, long-distance trails and other outdoorsy things.

I hope to share this knowledge with you and inspire you to explore new hiking trails too! 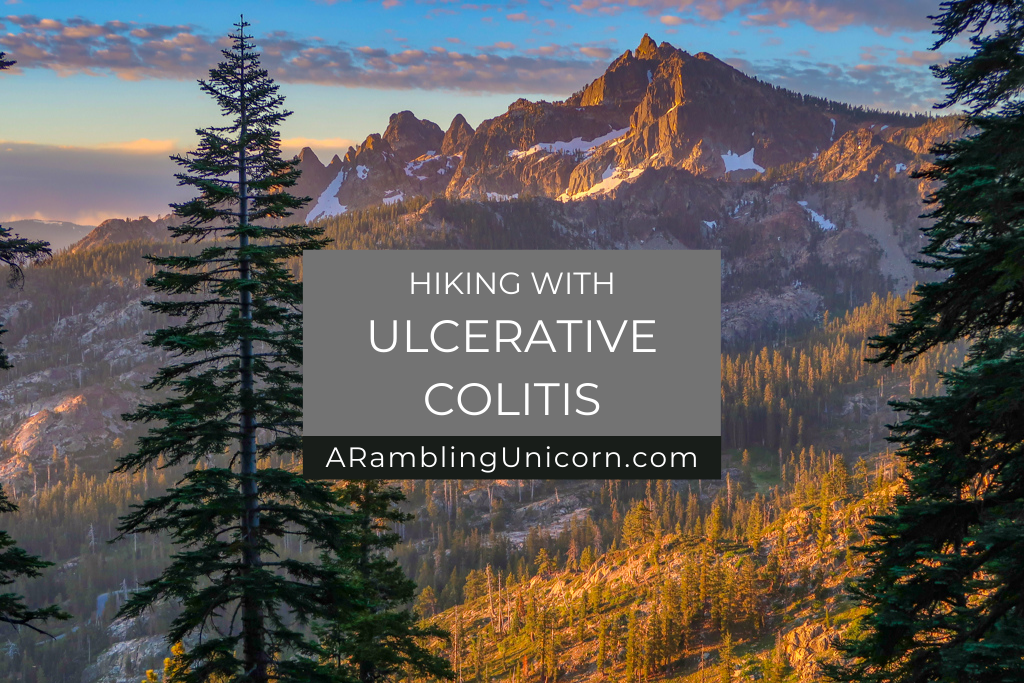 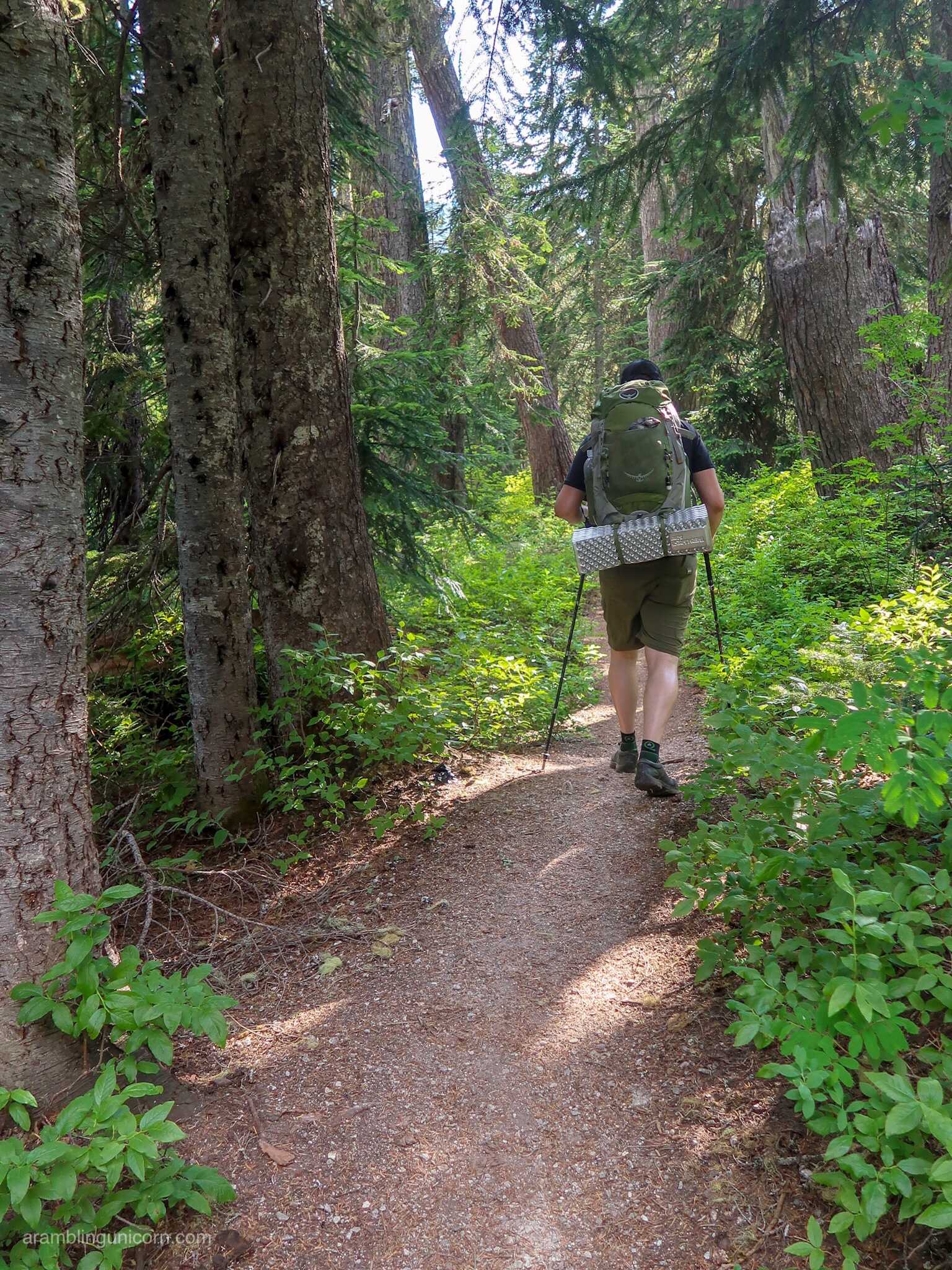 The Trail Not Taken: Misadventures on the Smithbrook Trail to Lake Janus 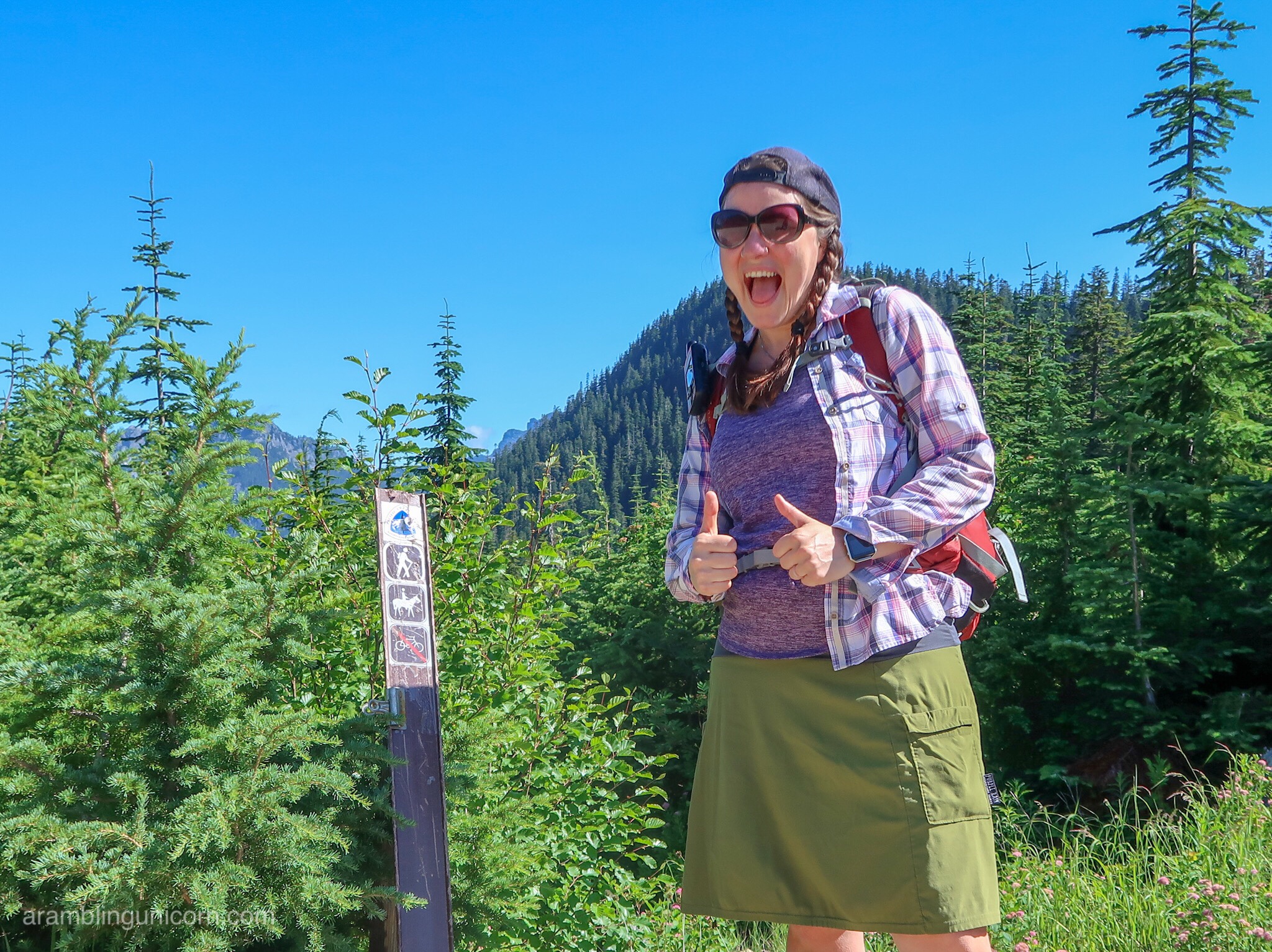 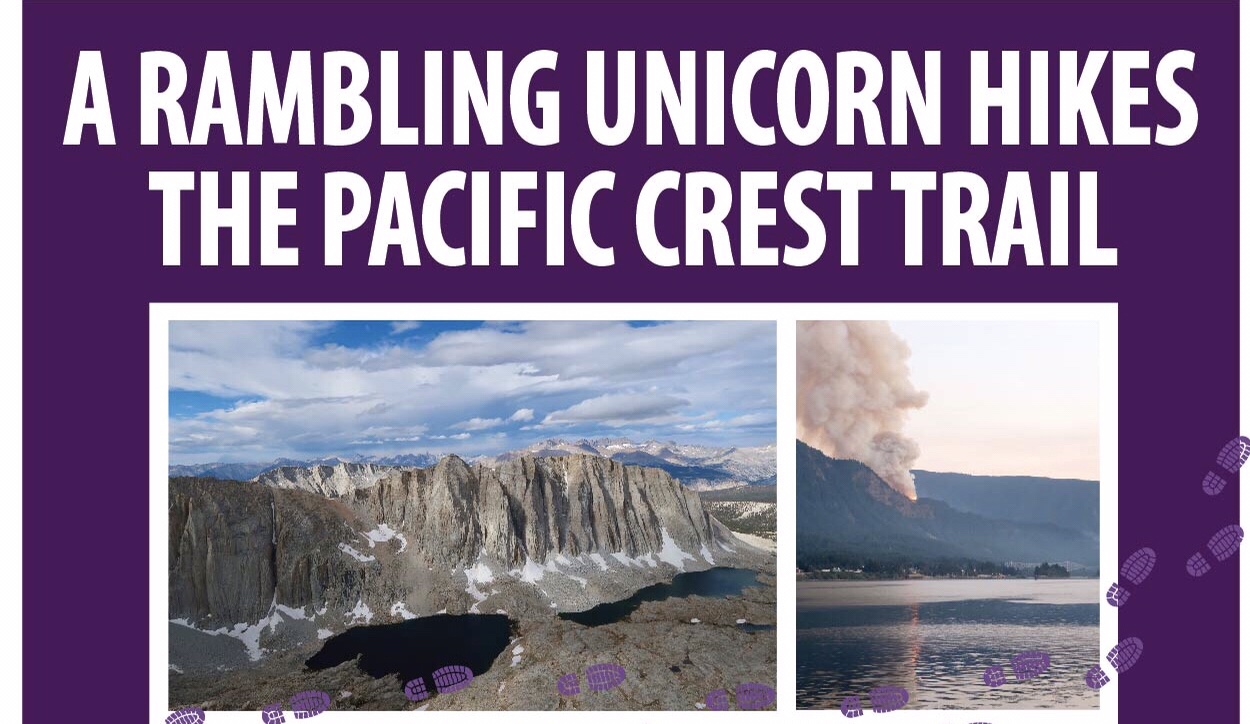 I want to hear from you! Leave your comment below: Cancel reply